Every day, nurses spend a lot of time on their feet – but it’s rare for them to march! The last time nurses took to the streets in a nationally organized protest for better, safer working conditions for themselves and their patients was back in 1995. That year, over 35,000 nurses from around the country marched in Washington DC to demonstrate against “staffing cuts that eroded nurse/patient ratios, the replacement of registered nurses with unlicensed personnel, and shortening hospital stays for critically ill patients”.

Tomorrow, once again, nurses take DC. Their primary cause: unsafe staffing levels. A grassroots movement called #NursesTakeDC, led by Show Me Your Stethoscope, is rallying to demand safe nursing-patient ratios “to save the lives of our patients and the nursing profession”. #NursesTakeDC is also calling on Congress to pass a specific bill that would set out minimum nurse staffing standards.

We have written about staffing ratio debates and union-led protests demanding safer practices for a decade. Inadequate nurse-to-patient ratios are not just leaving nurses in many hospitals and medical institutions overworked and overwhelmed, they are also actively endangering the lives of patients. Study after study has recorded the lethal effects of employing too few nurses. The American Association of Colleges of Nursing (AACN) has published a long list of such studies and their findings.

Higher nurse staffing levels are “associated with fewer deaths, lower failure-to-rescue incidents, lower rates of infection, and shorter hospital stays”, one study concluded. A big study which covered 43 patient-care units at large academic health centers observed that “the mortality risk for patients was about 6% higher on units that were understaffed as compared with fully staffed units”. An earlier study concluded that lower patient-nurse ratios on medical and surgical units “were associated with significantly lower patient mortality rates”.

Even as cost-cutting measure, reduced staffing is sure to backfire. Higher patient loads in hospitals make it more likely that patients encounter problems afterward and will have to be treated again. One study found that “when more than four patients were assigned to an RN in pediatric hospitals, the likelihood of hospital readmissions increased significantly”.

Of course, nurses themselves suffer the consequences as well. Research has indicated that almost 60% of hospital nurses work 12-hour shifts; that there is “a clear link between fatigue and safety risks”, and that nurses are almost twice as likely to get injured or fall ill at work than health care workers in general. 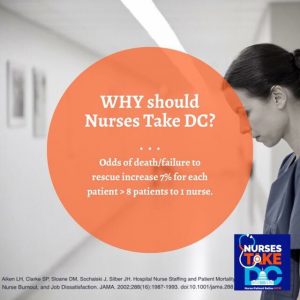 At the moment, federal legislation only requires hospital to “have adequate numbers” of nurses “to provide nursing care to all patients as needed,” which is pretty vague. Seven states across the country have passed laws that oblige hospitals to establish special “nurse-driven” committees to create better staffing plans. That’s the solution which for example the American Nurses Association prefers. But #NursesTakeDC and organizations like National Nurses United insist this is not enough.

Instead, they point to California, the only state which passed a law that lays down specific numbers about what the minimum nurse-to-patient ratio should be. They say that conditions aren’t getting better: under pressure of the nursing shortage, understaffing is only getting worse in many places. Patients’ lives are at risk, they say; your license too. So “if we want our practice to be valued, bedside nurses must unite behind the one cause that affects us all – Nurse Patient Ratios Now!”

Today, #NursesTakeDC is hosting a big patient safety conference, Nurses Resuscitating Healthcare, in Arlington, VA, with 900 participants and speakers like Kathleen Bartholomew, Linda Boly, Katie Duke, Marion Leary and Diana Breckenridge – all Registered Nurses themselves. Tomorrow, the#NursesTakeDC rally is taking place in front of the US Capitol from 11 AM to 4 PM. Coming right in the middle of heated congressional debate about a new healthcare law criticized for slashing access to health insurance, their protest will add to the voices calling for more comprehensive healthcare. Will you be rooting for them?

Update, May 5: Due to weather conditions, the #NursesTakeDC rally was moved to the Hilton Mark Center in Alexandria, VA.