They Need You: The Nursing Shortage Is Real – Nurse Recruiter

Are there enough nurses in the country?

If you said no to that question, you would be right. But don’t just take our word for it. Let’s look at the numbers.

The number of Registered Nurses has been increasing rapidly — just look at the chart below! According to the government’s Current Population Survey, there are already over 3.1 million RNs and nurse practitioners. That number isn’t likely to stop growing any time soon.

The Bureau of Labor Statistics (BLS) keeps occupational information on pretty much every sort of job in the United States, so we can take a look at registered nurses too. When the BLS presented its job outlook for RNs from 2014 to 2024, it projected employment of registered nurses to grow by 16%. That’s much higher than the national growth rate for all occupations, which is just 7%. It’s in line with the overall jobs growth for health care practitioners (17%). By 2024, they said, there would be almost 440,000 more registered nurses! 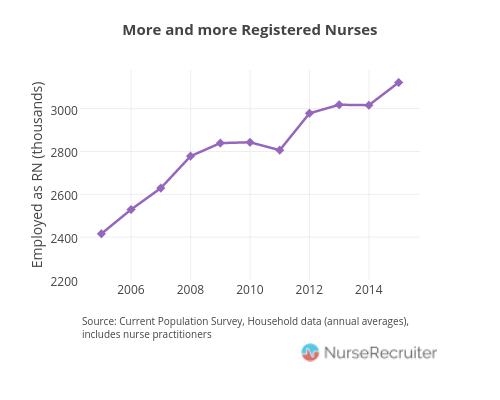 It’s also not like the people who work as RN now will all keep working till 2024. Some will retire, others will change jobs. So when the BLS published a list of professions with the largest number of anticipated job openings during the ten years from 2012 to 2022, Registered Nurses were right near the top. There will be over a million job openings  for RNs, their economic news release predicted. And don’t feel left out if you’re not an RN! That same report shows there will be a good 666,000 job openings for personal care aides and another 593,000 for nursing assistants, and 590,000 for home health aides.

The Nursing Shortage Has Been a Long Time Coming

The shortage of RNs is not new. Fifteen years ago, the Department of Health and Human Services already predicted the severity of the shortage. The American Association of Colleges of Nursing has been keeping track of articles and organizations talking about the nursing shortage. Its archive goes back to 2008, when the Council on Physician and Nurse Supply said an additional 30,000 nurses had to graduate from nursing schools every year in order to meet the demand. And here we are, almost nine years later, and we are still talking about the shortage.

Career One Stop, which is sponsored by the US Department of Labor, provides trend data on the expected employment growth for RNs for 42 states, the US Virgin Islands, and DC. Kentucky tops the list, with a projected growth rate of over 35% between 2014 and 2024. Even Connecticut, at the bottom of the list, is expected to see a 6% job growth rate for registered nurses during that decade.

The nursing shortage is spurred by an ever increasing demand and a shortfall in supply. A big reason for the increase in demand is the aging of the U.S. population. The Department of Health and Human Services already warned in a 2001 report that “there will be an unprecedented increase in the size of the elderly population as the baby boom generation ages”. Current US Census projections confirm the trend. By 2030, one in five Americans is expected to be aged 65 or older. By 2040, the number of Americans aged 65 and over will have surpassed 80 million, and by 2060 almost 100 million Americans (24% of the population) will be 65 or older. A third of foreign-born Americans will then be over 65. 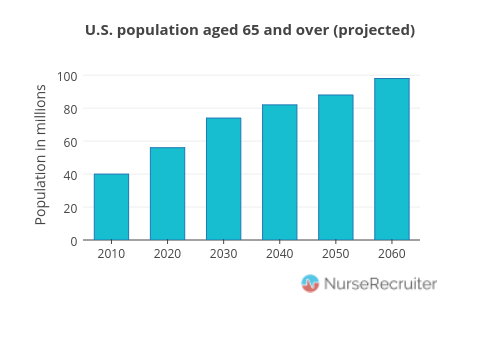 The aging population has consequences on the supply side as well. In 2011, according to American Community Survey data, half of the country’s Registered Nurses were 45 or older. The nursing workforce is itself aging, a 2013 report of the Health Resources and Services Administration (HRSA) signaled, and the “retirement of large numbers of RNs over the next two decades means a loss of experiential knowledge and leadership”.

Demand is also increasing because of the Affordable Care Act. “The share of people without health insurance keeps falling,” the New York Times reported last October, mapping out which parts of the country have seen the steepest drops. The National Center for Health Statistics found that the share of the US population that went uninsured for at least part of the past year dropped from 19.8% in 2010 to 12.6% in January-June 2016. When more people have health insurance, more people are likely to access health services as well. In particular, a 2011 report by National Partnership noted, Medicaid expansions in a number of states have made it possible for more lower-income women and families to afford healthcare and medical advice from professionals. 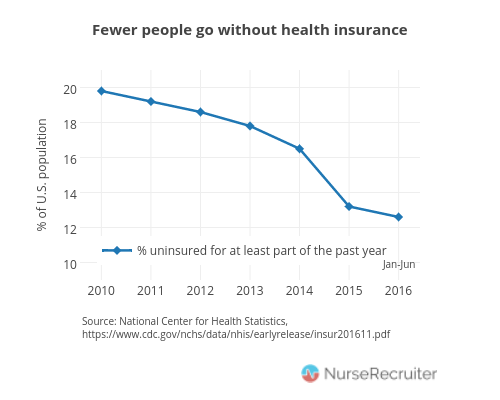 Will a Trump presidency change these trends? We will have to wait and see, but the Trump Healthcare Reform Plan includes repealing the Affordable Care Act. In comments gathered by the Advance Healthcare Network for Nurses, Mark Goldwein of the Committee for Responsible Federal Budget warned that “the plan would result in about 21 million people losing health insurance”. However, the Trump plan also includes allowing consumers to purchase insurance policies across state lines and fully deduct their healthcare premiums, and proposes allowing individuals to use Health Savings Accounts. Such proposed changes, if implemented, could result in even more demand for health-related services, and that means a demand for more nurses too.

The nursing shortage isn’t just increasing the demand for new nurses, it’s also affecting career decisions of those already working as RN. In 2014, the Robert Wood Johnson Foundation reported that many nurses are choosing to delay retirement. Between 1991 and 2012, about three-quarters of nurses who turned 62 continued to work, and even 24% of those who reached the age of 69 kept right on working.

Advanced RNs were especially likely to work past the age of 65; 17% of that group is aged 65 or older. About one in four clinical nurse specialists and certified nurse-midwives are 65 or older, and about one in ten nurse practitioners and nurse anesthetists are.

Help Is on the Way, but the Shortage Is Here to Stay

The shortage of Registered Nurses is well-publicized, and the promise of secure jobs has been attracting a new influx of nurses. “The number of nurses passing the exam required to become licensed as a nurse more than doubled between 2001 and 2011,” the HRSA report observed.

There is an especially strong surge in advanced degree nursing school enrollments. The American Association of Colleges of Nursing (AACN) has reported increases in the number of nurses pursuing master’s and doctoral degree programs. It highlighted the key role of RN-to-BSN programs in particular.

Nursing schools have trouble keeping up with demand, however. An AACN report on enrollment and graduations in baccalaureate and graduate programs warned that nursing schools turned away nearly 80,000 qualified applicants in 2012 because they didn’t have enough classrooms, faculty, clinical sites, or classroom space, and due to other budgetary issues.

The current growth in RNs with advanced degrees is also not anywhere near enough, experts say. An Institute of Medicine report on the future of nursing recommended increasing the proportion of nurses with a bachelor’s degree to 80%, the HRSA report warned, but right now only about 55% of the RN workforce holds a bachelor’s or higher degree.

To some extent technology might be coming to our rescue. Robotics is improving diagnostics, the Online Journal of Issues in Nursing reported. So are less invasive and more accurate tools for treatment. Electronic healthcare records allow doctors and nurses to receive faster and more accurate information at any time of the day or night, which improves coordinated care. Computerized physician and provider orders change nursing practices too, saving time and reducing costly and potentially harmful errors. But sophisticated new technologies also require more experienced and educated nurses.

A bright new future? The nursing shortage isn’t going away anytime soon. The opportunities are abundant and exciting.