The nurse who loved crocs

Being a nurse is deeply rewarding in many ways, but hey, it’s okay — all of us, in any profession, sometimes daydream about other lives we could be living. What’s your secret fantasy career? Do you still sometimes wonder how good an astronaut you would have been? What life as a fashion designer would be like? What about private detective? Childrens book writer? Baby goat farmer? Fortune cookie writer?

You’ll be surprised at the jobs these two nurses moved on to. Who knew nursing could be a gateway to undersea photography?

On to bigger teeth

Some of us are afraid of the dentist. Christy Kroboth was a dental nurse. But that wasn’t anywhere near fearsome enough, the BBC reported. Her real passion was elsewhere: “I’ve been a true animal lover all my life. I blame it on my mom. When we were little she was the one that would stop the car, pull over, and help turtles and ducks cross the road.”

So did she switch professions and become a veterinarian? Not quite. The crocs she loves aren’t shoes:

Where I live in the south part of Texas we have a lot of alligators and there are these big master-plan communities that have manmade ponds and these ponds have alligators in them.

She found the answer: she could start catching alligators and releasing them in the wild. Because why not? 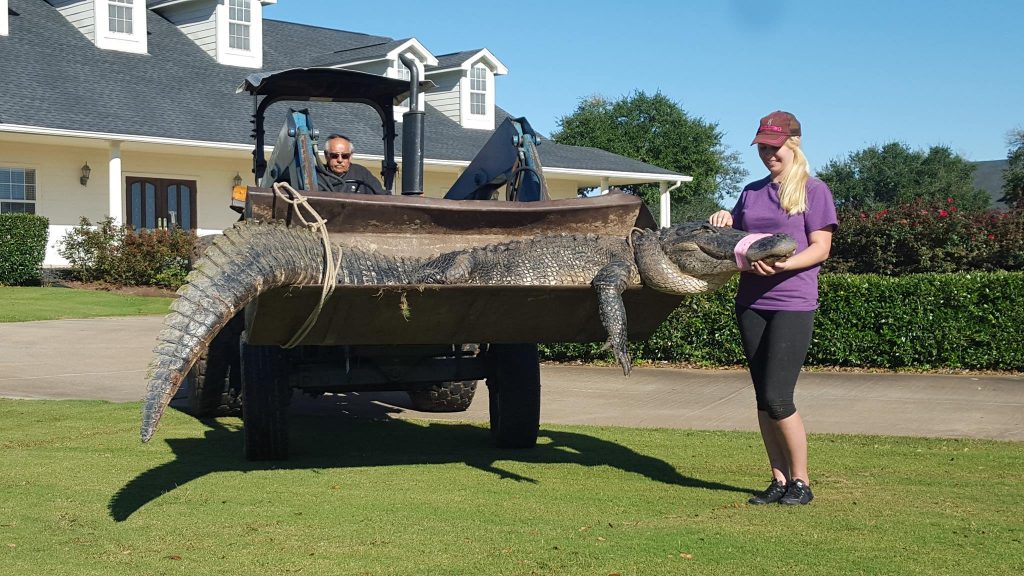 “When I first got my licence I was only doing this as a hobby,” she recounted: “I’d go to work as a dental assistant and catch my alligators on the side”. But now she’s a pro. She’s caught over three hundred of them. Together with her business partner Chris Stephens she even runs their own Houston-based company, Gator Squad. They catch alligators at golf courses and shopping centers.

Amazingly, it just takes a one-day course in Texas to acquire a license for catching alligators. The system’s pretty simple, Christy explained in another report: “If you don’t get bitten, you pass.” She was the only girl in the class, but she passed. “I had to prove myself to the guys and I went back out there and did it.”

Although female alligators are more aggressive than male ones and “if they wanted to eat you they could,” Christy insists the animals are really quite harmless. She even keeps a couple of educational alligators at home, which she nicknames “edugators,” to take to schools where she teaches people alligator safety. Sometimes the alligators she catches try to climb over the seats of her SUV “and make their way to the front to help me drive”, but otherwise, really, “people are afraid of alligators but it’s a lack of understanding, they are actually very shy creatures.”

Deb Schwedhelm was an Active Duty Nurse in the U.S. Air Force for a full decade. She’d gone to nursing school, joined the Army Reserves, went back to college to finish her Bachelors in Nursing, and then worked for ten years as a Registered Nurse in the military. Her husband is military too, and works as Explosive Ordnance Disposal Officer in the Navy. His work means that they move home every few years.

It’s all those moves that took her on a very different career path, an interview on the photography website PetaPixel revealed. She’d always vowed to herself that, one day, “I’m going to go to photography school and become a photographer”. She never did go to any photography school, but her dream came true. When one of the family’s moves went all wrong and they ended up getting a refund for two months of rent, she told PetaPixel, “I purchased a camera, a couple of lenses, a few books and began teaching myself photography and I’ve never looked back!”

Thank you @donttakepictures. Super grateful for the feature and the opportunity to have an image in the Seven Seas exhibit.

When we moved to Tampa in 2010, I decided that I would take the plunge […]. I thought that if there was ever a time to explore underwater photography, this was it. […] A whole new world opened up to me. From that moment on, I kept visiting the ocean as much as I could. There was this aching that I had to keep going — allowing the images to speak and the story to unfold.

Deb has won many awards and her work was featured in dozens of exhibitions and publications. She may no longer work as a nurse, but she still has things to say that will speak to travel nurses too: “With each and every move, I try to embrace all the new location, community, landscape, culture, etc. have to offer. I feel that relocating often has been such a gift”. And just about anyone can take her closing words to heart:

No matter what your personal journey, don’t be afraid to dream and dream big — you just never know what’s possible with a little dreaming and a lot of hard work.

So what is your secret career fantasy? Are you a nurse who dreams of taming crocs too? We can’t promise to do a lot for you, but we could help you get to a good location for it with a nursing job in Florida. 🙂