Pizza vs Pasta: The holy war to end all holy wars

Pizza vs Pasta: the holiest of holy wars

The great pizza vs pasta war of 2017 started with an innocuous question. We had been planning NurseRecruiter.com’s usual nurse week pizza giveaways when I asked what seemed to be the obvious thing to ask: “Why not spaghetti? I mean, why pizza?” The others on our conference call were taken aback. In the ensuing silence you could hear Nick taking deep breaths to compose himself before he seemed to lose the battle with that and put himself on mute. Spaghetti was my favorite dish, I didn’t get what the big deal was. “You guys still there?” I asked.

When Dan came off mute you could hear him punctuating his responses with what sounded like a shoe or a fist hitting his desk. “Look Robert” BANG “Why can’t it just be pizza like always? Everyone loves pizza!” BANG

“I don’t. I mean I don’t hate it or anything but I just don’t love it as much as everyone else seems to.” Another bit of silence lingered uncomfortably.

“And that’s just it isn’t it Robert?” David broke in, with his silly British accent. “If everyone loves pizza..” I cut him off there, I could see where his attempt to be the voice of reason was going and I was gonna nip that goody-two-shoes, Pollyanna sh.. stuff right in the bud.

I admit to waxing loquacious on the merits of pasta for the next couple of hours but I kept it to only the important points and didn’t ramble. However the ensuing revolt was just an enormous overreaction to my simple demand that our company begin to screen resumes based on any indications for pizza versus pasta preferences. “Surely you can’t be serious?” Nick asked. I didn’t take the bait, I knew he was trying to lighten the mood and I was indeed serious (“if not Shirley” I still thought to myself, tickled pink with my self-control).

To keep a long story short, things were said. Feelings were hurt. Personal property was destroyed in moderate amounts (largely owing to the fact we all telecommute from our own offices and I didn’t want to break any more of my own things) and the meeting ended on a sour note with some (subsequently exaggerated) spaghetti-based threats to some co-workers who we won’t name so that Nick doesn’t feel like a whiny tattle tale for running to HR.

In the ensuing days a clear rift developed and Nurse Recruiter was being torn apart by opposing teams in a holy pizza vs pasta wars with ominous undertones. Emoji of pizza and pasta began to appear next to usernames in the company chat rooms and team pizza really just began to lord their statistically insignificant majority over team pasta in what can only be described as enormously petty and immature ways. 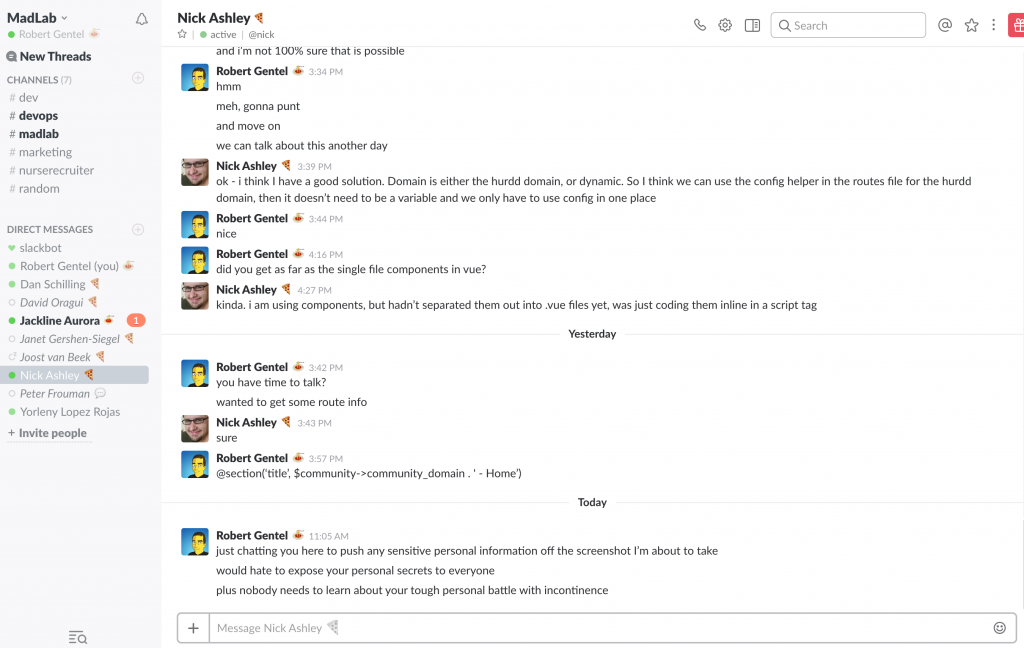 The holy war made it to our chat room where pizza and pasta emoji are showing up next to usernames.

The only thing that can save NurseRecruiter.com now would be to put the question to you nurses. After all you are the ones we are giving spaghetti lunches to (or pizza, on the off chance that happens to be the preference) and can decide for yourselves.

So what is it gonna be? Are you team pasta or team pizza (it’s ok, nobody’s perfect)? Each day of Nurse Week we are buying a nursing unit a pizza or pasta lunch to celebrate so let us know what you think it should be!

#teampizza all day every day. We all know which is better!

and for the record, my accent is fantastic!