“I kicked my doctors but I loved my nurses”: woman who survived cancer as a child now works alongside the RNs who cared for her

Rachel Oliver Smith is a Registered Nurse at Brenner Children’s Hospital in Winston-Salem, NC. She gets along with her colleagues well. But there is a special reason why she has a particularly strong bond with some of them, and with the hospital which employs her.

When Rachel was just four years old, she was diagnosed with T-cell lymphoma, a form of blood cancer. It took two years of chemotherapy treatments, but she survived. She’s has been in remission for nineteen years now. And she cherishes the memory of how kind the nurses at the hospital were, back when she was a seriously ill, but feisty young girl. 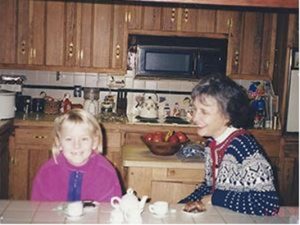 As a child patient overcoming cancer, Rachel Smith bonded with one of the nurses who cared for her, Nancy Smith. Here Nancy is visiting Rachel at her house in 1998 for a tea party .

One of her colleagues, Nancy Smith (no relation), played an especially large role. “Nancy watched me grow up and is like family to me,” Rachel explained. “When I look back on my time as a patient, I’m inspired by the love and care Nancy and so many of the other nurses gave to me and my family.”

Nancy’s example, and the experiences Rachel had as a child, were key to why she chose to train as a RN herself. She’d originally decided to become a doctor, a wonderful Associated Press portrait in the Winston-Salem Journal recounts, but changed her mind after the first semester. She remembered how, as a young cancer patient, she’d been “a bit of a brat” and kicked a doctor, and how the nurses had cared for her and distracted her. “They were just there all the time and they would laugh with you and be silly with you,” she told the AP reporter. So she made up her mind: “I kicked my doctors but I loved my nurses. I think I’m going to do the nursing thing instead.”

She now works on Brenner’s hematology-oncology unit – even as she also still checks in as a patient there herself every two years for a follow-up evaluation. Not just do her own life experiences give her a special insight into what she needs to do, but when a family member of a patient hears her story, it inspires them and gives them new hope.

“Nursing school is very hard, but it really pays off in the end,” Rachel told The Associated Press. “You get to meet so many amazing people and really impact them. That’s an awesome gift”.