At least one nurse is making a splash in these midterm elections. How many more are running? 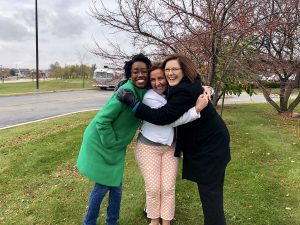 Lauren Underwood on the campaign trail

Up in Illinois, a Registered Nurse is making a splash in the midterm election campaign: 31-year-old challenger Lauren Underwood has a surprise 6-point polling lead in the state’s 14th Congressional district and “is now better known and better liked than the incumbent”.

Nobody knows how the election will end in reality tomorrow night, but that’s pretty impressive for a district which incumbent Randy Hultgren won by 18 points last time.

Lauren had already drawn attention by easily winning the Democratic primary in the mostly white district against six older rivals as the only woman and only African-American candidate. The Minority Nurse magazine published an interview with Underwood earlier this year about her journey from newly graduated RN to health care policy advisor and running for Congress. They also queried her on issues like the Affordable Care Act (she wants to fix and keep it), safe staffing and nurse-patient ratios (which she seemed ambivalent on), and nursing school costs and student debts.

Asked about her top priorities by The Chicago Sun-Times, Underwood stressed that we “must invest in comprehensive mental healthcare for our community in order to tackle the opioid addiction crisis”. But it’s not all been good press for her. She’s also run into criticism for presenting herself as a practising nurse in campaign videos and interviews, talking about “treating patients” and “giving discharge instructions,” when she worked as a research nurse but not in bedside nursing. She countered by arguing that she “spent thousands of hours working with patients” during her “clinical training and decade of nursing experience“.

Her story made us wonder: are there any other nurses running for Congress? Turns out that yes, there are!

Texas Democrat Eddie Bernice Johnson ‏was the very first nurse to ever make it into Congress, and she’s virtually guaranteed re-election in the state’s 30th Congressional District. Her long pre-Congress career in nursing went back to the 1950s, a Minority Nurse interview recounted a few years ago, when no nursing program in Texas would accept an African-American student and she moved to Indiana to become the only black student at a college there.

After graduation she started a nursing career at the VA, and ten years later she was appointed chief psychiatric nurse in Dallas. She’s been a Congresswoman for 25 years now, which didn’t pass without controversy, but she still adamantly insists: “We need a lot more nurses [in] elected office!” 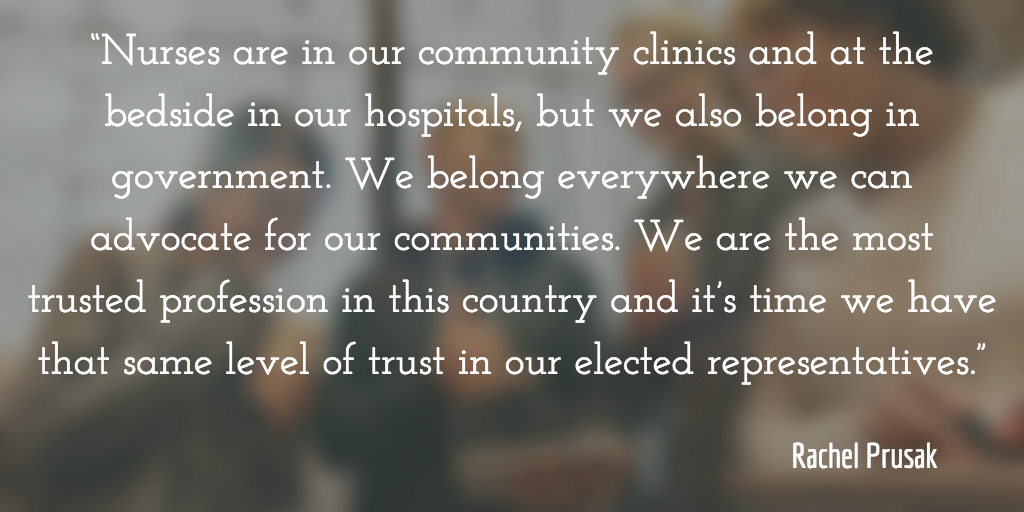 Do you agree? Nurse Practitioner Rachel Prusak is running for office in Oregon: “We belong everywhere we can advocate for our communities.”

Another incumbent Democratic Congresswoman in a safe seat, Karen Bass, was a licensed vocational nurse and physician assistant before becoming a politician. The Representative for California’s 37th Congressional District had a quick answer ready when asked how nursing prepared her for politics: “Good bedside manner”!

Up in Wisconsin, a nurse has set her sights even higher than the House of Representatives. Leah Vukmir, MSN, BSN, describes herself as “a nurse, military mom, and conservative with a proven record”, and she’s running for the U.S. Senate. She’s had a respectable career in the state legislature, serving eight years in the State Assembly and another eight in the  State Senate. Representing the 5th Senate District in Milwaukee’s suburbs, she narrowly won her first election but got re-elected easily in 2014 against a Libertarian challenger. This time she’s facing a more uphill battle, however: Tammy Baldwin is expected to win re-election.

Down in Florida’s 5th Congressional District, registered nurse and anti-abortion activist Virginia Fuller ‏is running as the Republican nominee. She faces even more daunting odds in a seat which the Democrat won by 28 points last time, however. Earlier this year, the American Nurses Association endorsed Nurse Practitioner Heather Ross for Arizona’s 6th Congressional District, but she narrowly lost her Democratic primary race.

Some Registered Nurses who had a good run in Congress have bowed out. In Tennessee’s 6th Congressional District, Republican incumbent Diane Black is not running this year, and California’s Lois Capps didn’t seek re-election in 2016.

There are, however, several more nurses running for office in state legislatures. Not as many as doctors – there’s a lot of those in politics! – but here’s a few we found. There are surely more: if you know any, let us know in the comments and we’ll add them! 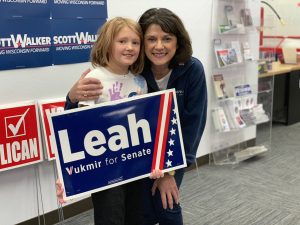 Leah Vukmir on the campaign trail

Which candidates are you rooting for?