What are the top paying locations for nurses?

When looking for the top paying locations for nurses, you need to take into consideration not only salaries, but also benefits. Furthermore, you must consider the cost of living. Because a dollar in Memphis will not buy the same goods and services as a dollar in Houston or a dollar in Bangor or a dollar in Chicago.

While we can speculate (and we may very well turn out to be right), the United States government gathers this data as a matter of course. This is, in part, where your tax dollars are going, and all of this information is free online! So let’s take a look at it.

The Bureau of Labor Statistics (BLS) puts together a National Compensation Survey on a quarterly basis. The Employment Cost Index looks at employers’ costs. According to the survey, wages at hospitals have gone up by about one-quarter since 2005. This is a national average.

Median wages for registered nurses are about $67,000. And the top-paying states (sorted by hourly mean wage) are as follows:

Did Oregon surprise you?

What happens when we break the numbers down by metropolitan area? Then the survey says:

It’s not too surprising to discover that California dominates this list. 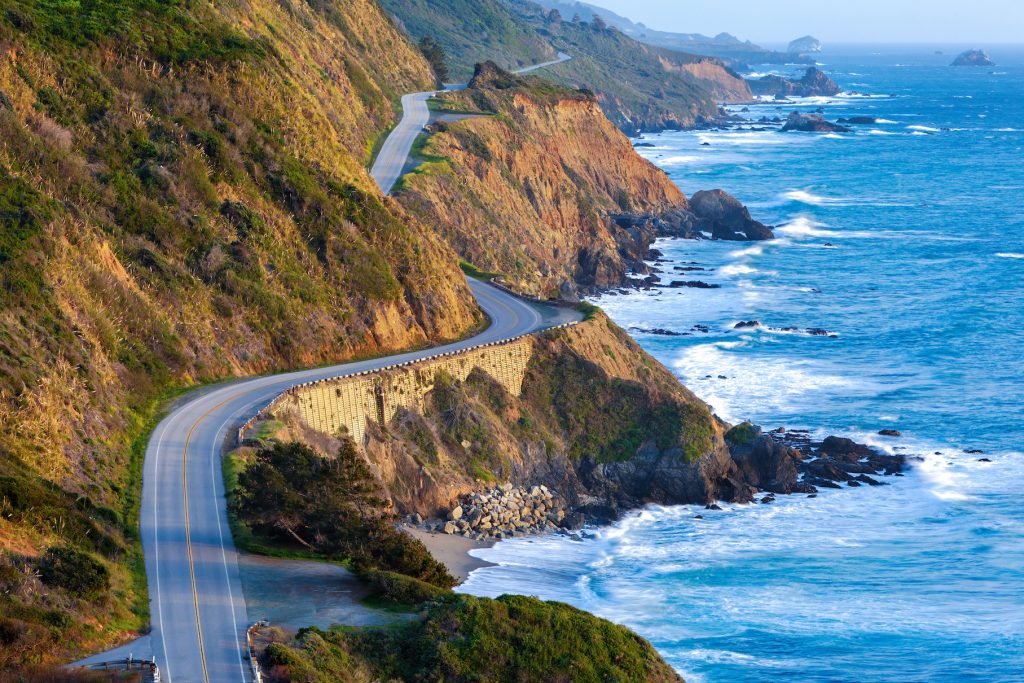 Pacific Coast Highway at southern end of Big Sur, California. At a median RN annual salary of $100,400, California is where registered nurses are paid the most. (Photo by Doug Meek)

The Mother Lode Region of California encompasses Amador, Calaveras, Mariposa, and Tuolumne Counties. These counties lie to the east of Sacramento. This region is inland in California, and is near the Sierra Nevada mountains. The biggest city in the area is California’s state capital, Sacramento.  Glassdoor comes in a lot higher for Sacramento; their average salary for a registered nurse is $100,000!

The North Valley Region of California encompasses Lassen, Modoc, Nevada, Plumas, Sierra, Siskiyou, and Trinity Counties. The region is close to Stockton and Merced. It, too, is an inland area, with some counties bordering Nevada. Siskiyou County borders Oregon. Many of these areas include national forest areas and wildlife refuges. Glassdoor calculates the average salary for a registered nurse in Stockton as being $67,272.

The Border Region of Texas consists of the following counties: Dimmit, Edwards, Kinney, La Salle, Maverick, Real, Uvalde, Val Verde, and Zavala. These counties are mainly to the south and west of San Antonio, and some of them lie along the border with Mexico. Glassdoor says the average salary for a registered nurse in San Antonio is $63,000.

The Hawaii/Maui/Kauai area encompasses all of Hawaii except for metropolitan Honolulu which is located in Honolulu County. Glassdoor comes in lower; their average for Maui Meadows (for a registered nurse) is $63,070.

And finally, the ‘balance’ of Alaska is pretty much everywhere outside of cities like Anchorage and Fairbanks, and outside of the southeast area. It includes the Aleutians East, Bristol Bay, Denali, Kenai Peninsula, Kodiak Island, Lake and Peninsula, North Slope, and the Northwest Arctic Boroughs; the Aleutians West, Bethel, Dillingham, Nome, Southeast Fairbanks, Valdez-Cordova, Wade Hampton, and the Yukon-Koyukuk Census Areas, and Kusivak. As you can imagine, many of these are rather large geographic areas with small populations and an abundance of conservation areas and national preserves.

Glassdoor bears out these numbers, listing an average salary for a registered nurse in Nome as being $63,070.

Now let’s look at areas with higher and lower costs of living.

Hence in Boulder, your top three expenditures would be pretty close to those in LA. Except you’d be expected to pay for all that with $9.51 less per hour.

Who knew Los Angeles could be a better deal than, well, anywhere?

Finally, let’s look at the special case of travel nursing.

As the Bureau of Labor Statistics points out, housing takes out an enormous bite. From city to city, housing costs generally run to about one-third of all expenditures. However, a standard perk for travel nurses is housing.

So let’s go back to our earlier examples of LA, Boulder, and Fayetteville, Arkansas.

A travel nurse in LA, on average (according to Glassdoor) makes $69,366. However, per the BLS, the average annual cost for housing is about $21,850. Including housing in your LA travel nurse compensation raises it to, effectively, a cool $91,216.

On average, a travel nurse in Boulder (per Glassdoor) makes $65,083. The BLS says the average annual cost for housing is just under $21,000. When housing is factored in, the compensation for a Boulder, Colorado travel nurse goes up to an effective $86,083.

In Fayetteville, according to Glassdoor, a travel nurse, on average, makes $60,505. According to the Bureau of Labor Statistics, the average annual cost is just over $6600. And when housing is included, your average Fayetteville, Arkansas travel nurse compensation goes to, effectively, $67,105.

California, on the other hand, is not a Nurse Licensure Compact state. In fact, except for the Border Region of Texas, none of the highest-paying states or metropolitan areas or non-metropolitan areas listed above are a part of the compact. But that’s where the biggest perk of travel nursing – housing – really stands out.

Because, while you might, on average, make more in Los Angeles than in Fayetteville, Arkansas, if you’re a travel nurse in Arkansas, and housing is included, you will be able to keep almost as much of your earnings as a non-travel registered nurse in LA.