Should nurses heed “do not resuscitate” tattoos?

If you are a nurse in the US, you are likely familiar with “do not resuscitate” (DNR) orders.  If you work in a hospital, you are likely aware of their policies and procedures related to DNR orders.

But do you know what to do if your patient’s DNR order is not written on a piece of paper but permanently tattooed on their skin? 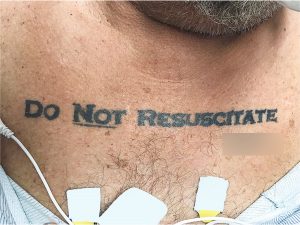 If you are uncertain, you are not alone.  As was recounted in a recent letter to the editor of the New England Journal of Medicine, a team of doctors and nurses at a Florida hospital emergency department also had trouble figuring out what to do when presented with an unconscious 70-year-old patient with a tattoo on his chest reading “Do Not Resuscitate” along with what they presumed was his signature.

Given the extraordinary level of commitment that getting a DNR tattoo implies, at first impression it might seem reasonable to regard it as a valid expression of the patient’s wishes regarding certain types of medical care.  However, while it is easy to change one’s mind about a DNR order, it is not so easy to change a DNR order permanently tattooed on one’s skin. 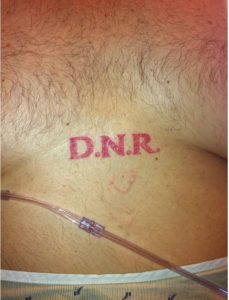 “D.N.R.” tattoo patient received as a result of losing a bet made while intoxicated and playing poker with hospital coworkers. From “DNR Tattoos: A Cautionary Tale” in the Journal of General Internal Medicine.

In addition to considering the possibility that the patient’s wishes may have changed since getting the tattoo, one must also consider that it is possible that a tattoo perceived as a DNR order never accurately reflected the patient’s wishes.  That was certainly true in a case recounted in a 2012 article in the Journal of General Internal Medicine.  In that case, a 59-year old patient admitted for surgery had a tattoo reading “D.N.R.”  on his chest and during a review of his code status, it was determined that he actually did “want resuscitative efforts initiated in the event of a cardiac or respiratory arrest” but “did not want prolonged attempts at resuscitation.”  He further recounted that he got the “D.N.R.” tattoo as the result of a bet he lost while intoxicated and playing poker with his hospital coworkers.  It thus became clear that the “D.N.R.” tattoo did not ever accurately represent his wishes regarding resuscitative care.

In the Florida case, the medical team “initially decided not to honor the tattoo, invoking the principle of not choosing an irreversible path when faced with uncertainty” but then requested an ethics consultation that resulted in being advised  “to honor the patient’s do not resuscitate (DNR) tattoo.”  The letter’s authors recalled that the ethics experts they consulted “suggested that it was most reasonable to infer that the tattoo expressed an authentic preference, that what might be seen as caution could also be seen as standing on ceremony, and that the law is sometimes not nimble enough to support patient-centered care and respect for patients’ best interests. ”  The patient later died and the letter’s authors noted that they were “relieved” to eventually find a valid, written Florida Department of Health DNR order that was consistent with the DNR tattoo.

These cases illustrate that there is still a lot of legal and ethical uncertainty about the extent to which resuscitative care wishes expressed in tattoos should be respected.

We want to know what you think.  Have you ever treated a patient with a DNR tattoo?  Should nurses heed “do not resuscitate” tattoos?  Let us know!

I think the majority of the DNR tattoos reflect the desires of the person. I can’t imagine someone enduring the pain or the time to have a tattoo done and not want it to be honored. I think the person who lost a bet would be the exception. I frequently say I am going to have a tattoo DNR so I won’t be recsuscitated and be a burden to family. I am fearful of needles though.

I would have honored the DO NOT RESUSCITATE tattoo on the chest but not the DNR which could have been anything(i.e. someones initials). The chest tattoo was placed there for just that kind of situation where the patient was unconscious and unable to tell you himself what he wanted. If in the course of his life he had changed his mind about his final hours he could have have had the ‘NOT’ removed.