She was a Pediatric Nurse, tending to three crying infants — then the idea hit her. Now her Tranquilo Mats are soothing babies everywhere, and you can win one!

Pediatric nurse Melissa Gersin was having a particularly stressful shift in the nursery. Three babies all needed soothing, but there wasn’t much equipment, so she used her hands, feet, voice and cellphone to tend to everything at the same time. She would hush one child in a bassinette, move the seat of a second baby undergoing a car seat test, while making sure that a baby having double phototherapy was getting some motion too, even though she couldn’t pick him up. But before five minutes passed, they would start crying again.

Today, Melissa is a successful businesswoman.
Last February, she starred in Shark Tank.

Melissa was a certified Happiest Baby Educator and her colleagues called her the “The Baby Whisperer”, but this time, it just seemed too much… and that’s when the idea hit her. The Tranquilo Mat. A portable, vibrating baby mat which stops crying by mimicking the sounds and motions of a woman’s womb. Its gentle vibrations and soft sounds calm the baby within instants… and provide parents with some much-needed relief.

Today, Melissa is a successful businesswoman. Last February, she starred in Shark Tank, pitching her product to the investors on the business reality TV show. The Tranquilo Mat was listed as one of the “most life-saving baby products to order on Amazon”. In an exclusive interview, Melissa talked to NurseRecruiter.com about her experience. What was being on Shark Tank like? What’s so special about the Tranquilo Mat, and what clinical applications could it have? And what does she miss most about nursing? Keep on reading to find out about a special Tranquilo Mat giveaway too! 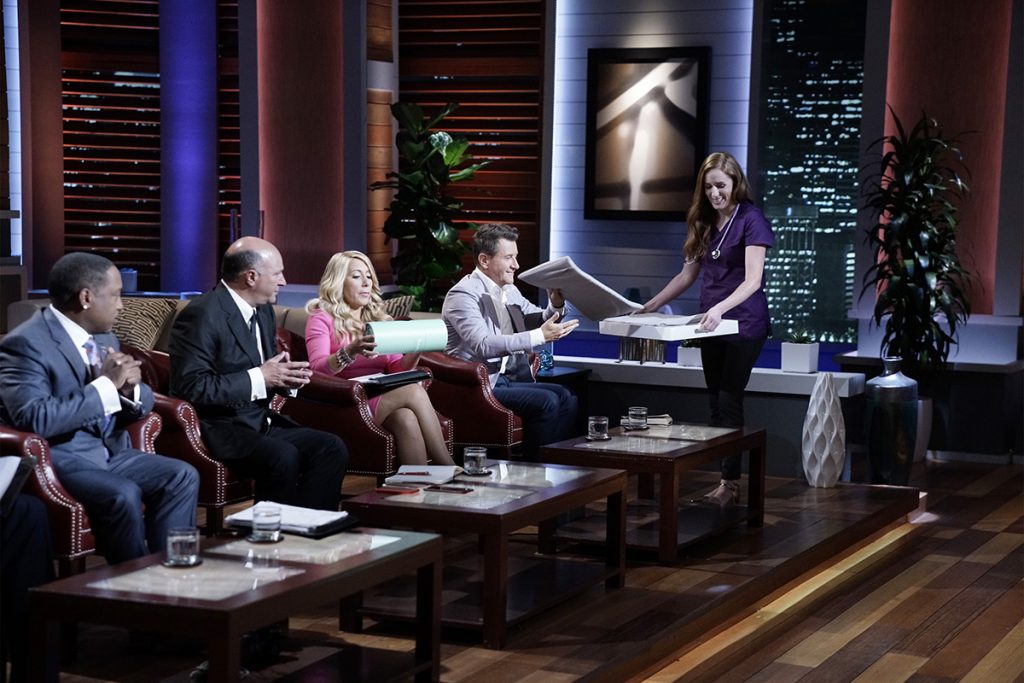 At first it was stressful! But as a pediatric nurse and an EMT, I’ve been in emergency situations since 2003. Working as a nurse you are in many life or death situations, where doctors are screaming at you and expecting a lot of stuff from you on the spot. When I was on Shark Tank I instantly realised, the house isn’t on fire, nobody is going to die. So I felt really chilled about this.

Even if Kevin O’Leary is going to scream at me: “WHAT IS YOUR VALUATION!?!?”, the reality is that nobody’s going to die here. When I kept that in mind, I could just take my time and answer the question. I simply looked at them like people, like potential investors, not as big TV stars. If I’d done that, I would’ve totally freaked out.

They’d been the ones to reach out to me, so I was very open to whatever would happen. I didn’t go in thinking “I need this deal – no matter what!” It was more like, “oh cool, this is an opportunity I was presented with, I just don’t want to look like an idiot”. Going in really open minded helped with the outcome.

What’s the best thing about the Tranquilo Mat?

There are a lot of things that can help soothe a baby, and some of the ones that work best are based on the science of how babies are soothed in the womb. But our Tranquilo Mat is the only one that mimics both the sound and constant motion of being in the womb. 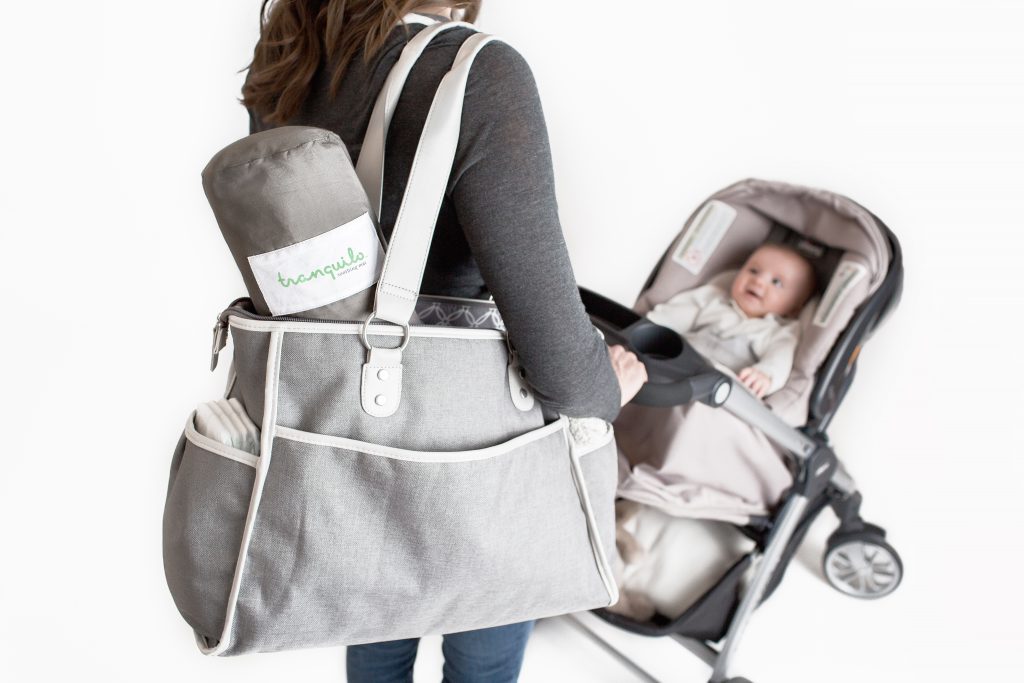 Take it anywhere: the Tranquilo Mat is portable and versatile

There are swings and vibrating chairs, for example, but they have been built to play cutesy lullabies instead. They’re also big and bulky — try bringing a baby swing on a plane!

These days parents are going everywhere — the millennial parent is not going to stay at home all year round. And even if they do, they might not have a big apartment with space for a bouncy chair, a bassinette, a swing and all the rest…

That’s the biggest downside of other products. Car seat, stroller, baby carrier, crib, bassinette, you need a different item for each purpose. When children are 2-3 months old they can sleep in swings, but that doesn’t help you if you’ve got an 18 month year old who’s trying to sleep in a crib.

The Tranquilo Mat is versatile. It’s soothing and you can use it everywhere. So it’s very practical for every-day soothing of your baby.

Would you love to soothe your baby on a Tranquilo Mat? Or would this be a godsend for young or expecting parents you know? In partnership with Tranquilo Mat, we’re giving away a small mat (worth $84.99) and decorative cover (worth $24.99), and you could be the lucky winner!

The mat also helps to improve bonding between child and parent, especially when a baby constantly cries. It can be like psychological torture for a parent — at least it was for my parents! Many moms who had to spend hours each day trying to soothe their baby tell me how the Tranquilo Mat made it possible to actually spend time just playing with their child again!

What possible clinical applications do you see for the Tranquilo Mat?

Tranquilo Mat is not a medical device, nor do we make any medical claims.

That being said, hospital nurseries and outpatient offices use a variety of soothing techniques to keep babies calm during medical treatments. Anytime you cannot pick up a baby but need them calm, a Tranquilo Mat could be helpful the way a swaddle blanket or a pacifier is. Just like a swing being used to keep a baby calm in a hospital nursery doesn’t make it a medical device.

One hospital has suggested the Tranquilo Mat could be used in a car seat test (over properly buckled straps) or during phototherapy (under a bili-blanket). Similar to using swaddling and pacifiers, mimicking the sound and motion of the womb with the mat might also help babies during a painful procedure. 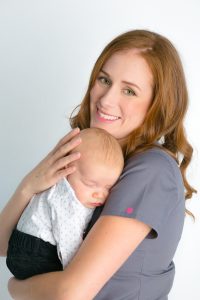 The mat is being used in one hospital at the moment to help keep babies calm in conjunction with giving them sugar water (a pharmacological treatment). They use it during blood draws, usually done by heel stick. One of our customers actually purchased the mat because their child was having jaundice issues. Her baby would wake up when they stuck her heel, but she would never cry. Once they had completed the procedure, she’d be right back asleep again. That customer really attributed that to using the mat.

The problem of drug addiction is huge in the U.S. right now, and children who are born from parents who suffer from opiate addiction are very likely to score highly on irritability and therefore need even more soothing. Some of these babies even end up in neonatal intensive care, where there may not always be a nurse available to hold a child undergoing drug withdrawal. So some nurses have suggested that our mat might be another tool to add to their “soothing” toolbox, especially in places already using swings or sound machines.

What do you miss most about nursing?

I miss the tangible difference of making a patient who was unwell become really healthy, happy and lively. Seeing that patient turn around in a very short timeframe, and the realisation that you helped bring about that change.

This is why I always try to connect with my customers, to see how the product has helped them, to get the same kind of active feedback. But unfortunately that’s not always possible, because of the four million other things I have to do with the business.

I also miss the camaraderie with all the people you work with. Especially as a staff nurse, you build a really close-knit team. I have that now again with our business too, but our team is very small compared to a hospital staff nursing team! Especially when I was starting out with this new business, it was quite solitary.

Where should people go if they want to buy your product?

We’re back in-stock on our website at Tranquilomat.com, as well as on Amazon, so you can order your Tranquilo Mat easily online! We’ve signed on some 25 independent retailers too, so we have also introduced a store locator on our website, so people can check out the product in person and shop locally. We expect to expand into the Canadian market in 2017. You can also find Tranquilo Mat on Facebook, Instagram and Twitter.

Follow us to find out more about Melissa and the tips she shared with us!

Melissa offered up some invaluable advice as well! If you’re a nurse who’s considered starting your own business, you’ll want to read the second part of our interview. But she had lots to say to young and expecting parents too. We’ll be publishing part 2 here soon, so follow us on Facebook or Twitter to make sure you catch the link!

Have you thought of using this for people c neuro or Parkinson’s problems or perhaps for some with elderly dementia?

Hello, I am a new grandma and she’s my first
this would be the perfect grandma’s gift

This is amazing as a surgical nurse. I would love to have this.